The Palatial Castle with the Burggarten 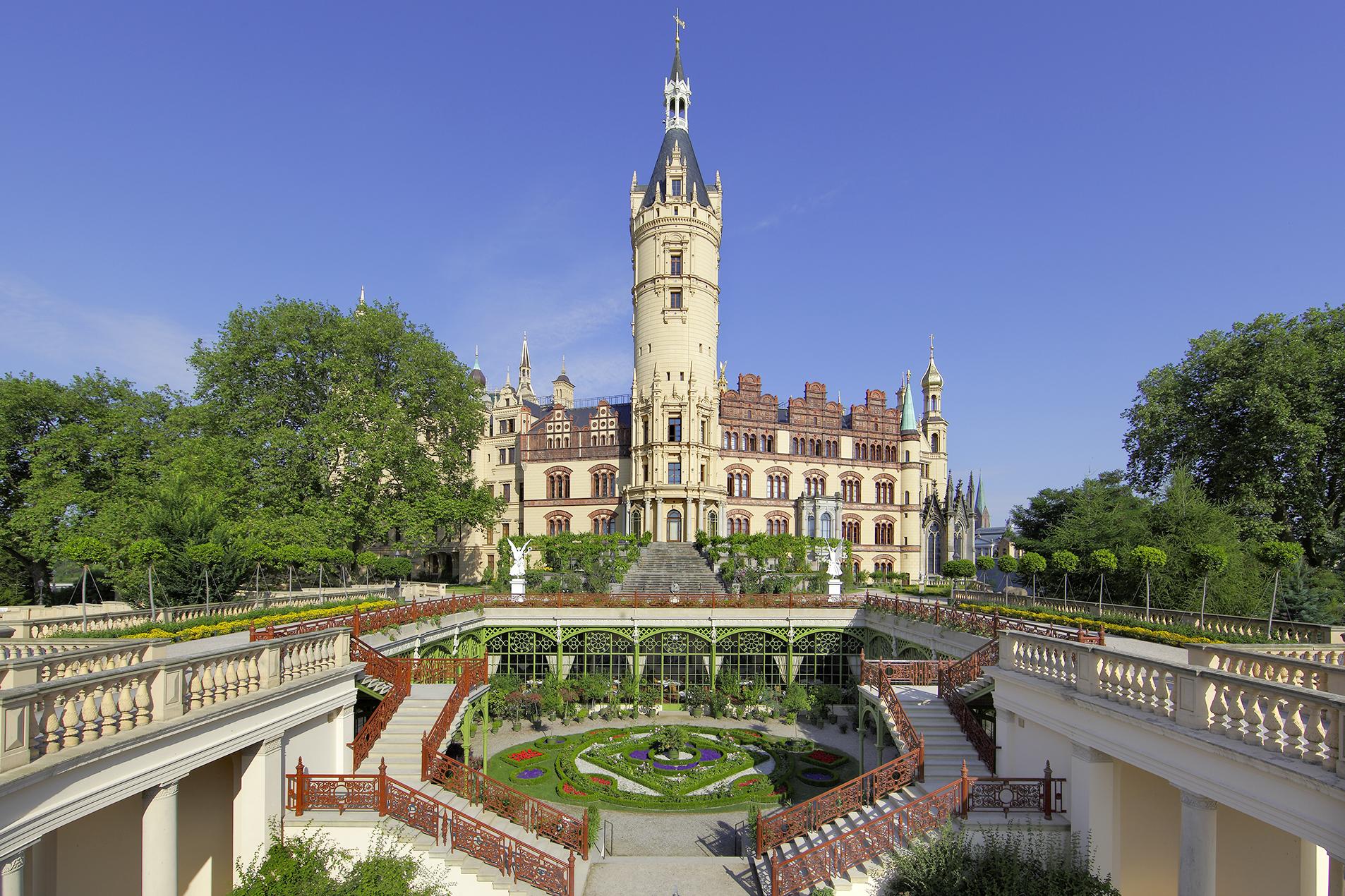 The Castle is the core of the Schwerin Residence Ensemble and the focus of all the sightlines. Its history as a seat of sovereignty goes back to the Slavonic period. Niklot, the last free prince of the Obotrites, was conquered by Henry the Lion in 1160; Henry thereupon had a German fortress built on the remains of the Slavonic castle mound and founded the city of Schwerin.

Nearly 200 years later, in 1348, Niklot’s Christianized successors retrieved the fortress. From then until 1918 they ruled from here over the Schwerin area of the province of Mecklenburg, almost without interruption. In 1918 the November Revolution forced Friedrich Franz IV to abdicate. He and his family were compelled to leave the Castle. After the Grand Ducal family departed, the Castle passed into the ownership of the State and served repeatedly as the seat of the provincial parliament (“Landtag”): during the Weimar Republic and from 1948-1952. Since 1990 the parliament of the newly-founded State, or “Land”, of Mecklenburg-Vorpommern has met in this venerable building. During and after the Second World War it also became a military hospital and a refugee shelter. The German Democratic Republic (East Germany) used the Castle as the seat of the regional government of Schwerin, a residential training college for female teachers, a rehearsal and concert venue for the Schwerin Philharmonic, and an outpost of Berlin’s “Hanns Eisler” music school, among other things. It has also served as a museum since the 1920s. Today, the Schlossmuseum, consisting of throne and ceremonial apartments with its historic decorations and furnishings along with the living quarters of the royal family, can be visited.

The Castle went through two main periods of remodelling: in the 16th century under Duke Johann Albrecht I and in the 19th century under Grand Duke Friedrich Franz II. Shortly before the Thirty Years’ War (1618-1648) broke out plans were made to remodel the Castle in the Renaissance style. However, the decades of conflict frustrated their full implementation. Its present appearance derives mainly from these phases of remodelling, although the core of some of the buildings, such as that of the Bishop’s House, is somewhat older. The most formative phase, between 1843 and 1857, was determined by the court architects Georg Adolf Demmler and Hermann Willebrand and by the King of Prussia’s architect, Friedrich August Stüler. Gottfried Semper also contributed designs for the remodelling. However, the Castle Chapel, the first new Protestant church to be built in Mecklenburg, is 16th century in origin. In the 19th century a choir building was added and it underwent some interior remodelling.

Today the Castle is used by the parliament, the Chapel community, as a museum and for catering purposes.

The conscious linkage of the buildings of the Residence Ensemble to the landscape of the lake, thus providing a romantic setting for the interaction between nature and human creativity, plays an important part in this cultural landscape which was created in the 19th century. So it is not surprising that the Burggarten, with its variety of garden areas, is regarded as a masterpiece of this harmonious interplay. The plans by Peter Joseph Lenné were realized by the Court Gardener Theodor Klett.

In the centre of the Burggarten, below the terrace of the Main Tower, is the Orangery, and just beside that is an artificial rocky grotto. The advanced use of cast iron, then very state-of-the-art, in the Orangery’s construction is a contemporary testimony to the Industrial Revolution. The Orangery has remained true to its purpose of protecting plants in the winter months. In the summer months, people can sit in the café here and enjoy the view of the Castle and the lake.